For quite a few years now I have been convinced of the health benefits of eating fish, such as my salmon recipe here, but would like to include wild caught fish that avoid some of the problems that have cropped up with intensive farming operations.

I have not yet trained myself to like the flavor of wild caught salmon, it’s a work in progress, but there are other fish out there that might be worth trying. Given my cooking style, a pan fried sea bass recipe might be right up my alley!

Growing up I had been lead to believe that sea bass, or more accurately Chilean Sea Bass, was the way to go. Super tasty and so sophisticated, all those restaurants that offer it can’t be wrong, right? No need to do any more homework, it’s settled.

But it turns out that a Chilean sea bass is actually a Patagonian toothfish, renamed to better market the fish in the United States. And, even worse, in years past, the fish has been horribly over-fished in some areas and populations have collapsed, which is why you can find all sorts of websites that recommend that you never ever eat Chilean sea bass. It was also priced at $5-10 a pound. Which might be one of the reasons it was over fished.

But if you talk to a fish monger or two, you might hear a different story. Chilean sea bass is no longer so inexpensive, and in many areas, it is no longer over fished and the wild populations have rebounded from their low levels in the 1990’s and early 2000’s.

And you don’t have to take your local fish monger’s word for it either, there is a governing body that rates the sustainability of fish populations and harvesting methods. Even better, if you like to shop at a grocery with high standards, they may have markings on their available fish letting you know how each species is ranked by the Monterey Bay Aquarium Seafood Watch.

So for instance, when I stopped by my Whole Foods fish department, I was pleased to see a sign next to the Chilean sea bass that it was rated Certified Sustainable Seafood!

But enough about how good I feel about myself when I choose pan fried sea bass fillets, let’s get on to cooking them! My preferred method is very similar, if not identical, to my breaded pork patties recipe. If you have ever dredged and coated anything before frying in your pan, then you already know exactly what I’m talking about.

My big breakthrough finally came when I gave myself permission to use an oven thermometer probe to know when my fish was done. I had zero trouble getting the panko coating to turn out how I wanted, but making sure the fish was done, without being over-done was problematic for me.

As I write this, I am still relatively committed to a low-carb dinner plan, so this usually gets served on top or next to a large salad, often with roasted vegetables as well. 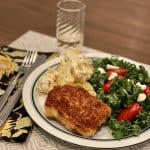