This recipe proved to be a little elusive for me.  Not because there aren’t enough tzatziki recipes available to be able to copy a few and see how they turned out, there are a ton of recipes out there!  No, it was tough for me because I couldn’t find any recipes that fit the way I cook and work in the kitchen.

Almost every tzatziki recipe that I could find started with salting a chopped cucumber, and then letting it drain for an hour or so.  No thanks.  I’m not looking to spend over an hour on this recipe, tzatziki needs to be a quick hitter, assuming you already have all of the ingredients on hand.

To be fair, there were some recipes that I found that took 30 minutes or less, much more my speed, but they almost all produced a very watered down and thin sauce that wasn’t at all what I was looking to reproduce.

Instead, I want a fairly thick tzatziki sauce that holds up well on my fork, and won’t break when I pack the leftovers into the fridge for a day or two.  So, under 30 minutes and not too runny, doesn’t sound too picky, right?

My breakthrough occurred when I got frustrated enough with the salt and wait approach that I decided to get a little bit more aggressive and forthright.  Instead of gently encouraging the water out of the cucumber, why not just forcefully remove it, quickly?  After seeding and chopping the cucumber, I used my stick blender to reduce the cucumber to a mush, and then simply drained it using a tea towel, giving it a really tight squeeze, works like a dream!

One more change I made that differed from many of the recipes I had found online was to move towards the thickest yogurt I could find.  Normally, I enjoy the soft yogurt, with the whey that is normally removed when making Greek Yogurt, but that was simply too runny for a nice tzatziki sauce.

So now I use either Greek Yogurt or a triple cream yogurt that I found from Siggi’s.  Yes, the calories are higher, along with the fat content, but if you’ve read my blog before, you know I am a sucker for full fat ingredients, and my yogurt is no different!

After figuring out which yogurt to use, and how to remove the water from my cucumber as quickly as possible, the rest of this tzatziki recipe comes together all by itself.  I dump all of the other ingredients into a 4 or 5 cup measuring container, and break out the stick blender again, and stir and blend all at once until nice and smooth, probably 30 seconds or less. 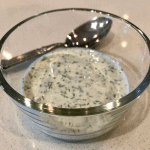