I love cooking bacon, no two ways around it. I’m sure that’s not earth shattering, really, who doesn’t love bacon? Ok, besides vegetarians and people who have never had it. It’s been a staple in my home since before my children could even talk.  But they learned about bacon, quickly!  One of their first verbal food requests was for “cooking oven bacon!”  It’s possible that they have never seen, or at least remember, a time when I cooked our bacon in a skillet.

**Not interested in reading about why I cook bacon? Here’s the recipe!**

It goes with just about anything, or nothing at all. Great in the morning, great at lunch, and even great with dinner. Shoot, I’ve even gone into the fridge late at night and grabbed some extra pieces that were laying around. C’mon, it’s bacon! But what I really love, more than any other kind of bacon is thick cut bacon, and it my house, it’s the only way to go.

You might not think that it is worthwhile to put together an entire page on this blog on how to bake thick cut bacon in the oven. But I can tell you that I’ve eaten enough bad bacon at other people’s homes, and it is apparent that some thick cut bacon makin’ lessons are necessary. I’ve even had a few food snobs stop by and remark at how tasty my bacon is, and I’m telling you, there’s nothing to it, so I’m not sure what else they are eating, but they really liked what they had when visiting me.

There are only two important steps here, first, always buy thick cut bacon, don’t go for the thin sliced stuff, it’s not worth your time. Seriously, thick cut or nothing! Second, bake it in the oven, which leaves you free to do other thinks and makes clean up a snap!

OK, so maybe I wasn’t being totally forthright above, there are more than two things to think about when cooking bacon in the oven, or anytime at all.  Where does your bacon come from?  Would you be scared to find out what kind of conditions that pig might have been raised in to make sure you have bacon on your table?  For most of the commercialized market, bacon is pretty horrid.  Not that it tastes bad, but that it can often be processed with all sorts of nasty chemicals, think unnatural nitrites and nitrates, and grown in overcrowded disease ridden swamps of poo called CAFOs.

I can’t do that anymore.  Having learned about where most of the bacon I ate as a child, and young adult, came from, I made a vow to myself to do better, both for the health of my family, as well as for the overall well being of the farm animals being raised in my name, to appear later on my dinner table.  It’s taken a bit of searching, but there are plenty of farmers who raise pigs, and other animals, on pasture, just like they are naturally designed to live!  Without the use of antibiotics and added hormones, these pigs lead a better life, are processed in a more humane manner, and don’t run the risk of passing nasty medicines and unknown chemicals along to my children.

Don’t believe me that there is a difference between responsibly and humanely raised pork and commercially hyper-processed bacon found in mega-stores like Walmart? Check out these two different sites, and then let me know what you think! The first is Niman Ranch, a collection of sustainable farmers providing pasture raised meats for online purchase, but also available in retail stores.

And the second is a the website of a relatively small farm in southern Georgia that is leading the charge on regenerative farming practices and does a super job of showcasing the difference to the environment between the two approaches. Check out both links and then let me know where you want your bacon to come from.

**UPDATE**  Since I originally wrote this article, I have moved to Texas, and as the saying goes, it seems everything really is bigger in Texas!   Including the bacon.  So my “thick cut bacon” is now… really thick!  I still have the same options that I had before in the grocery, plus a few choices that I had not seen before, including one product that includes only 4 slices per package, because it is so thick!

Which brings me to another approach when baking your bacon in the oven.  You can still cook at 400 degrees if you like, but if your bacon is super thick, you might not get the result you are looking for.  If you have the time, and I recommend you find the time, try cooking at 300 degrees, taking significantly longer, and compare and contrast the end results, I think you’ll be pleased.

As an example of how long you may have to set aside for this method, I cooked up a tray of oven bacon this morning.  It took me just a few minutes to line my baking tray with parchment paper and turn the oven on to about 300 degrees.  And it took about 90 minutes to allow the bacon to get to my desired level of crispness, and honestly, I think it could have done with maybe another 10-15 minutes! 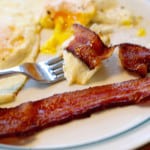 Thick Cut Bacon In The Oven

Bacon is one more food item that is pretty tough to get a nutrition panel set up for.  How thick is thick?  How long is your bacon, compared to mine?  What actually makes up one serving?  So I cheated, and looked at the back of a package of bacon from Niman Ranch, and tried to make this panel below look very close to the panel on the bacon box.  To get to these numbers, it turns out that one serving is about 15-17 grams of bacon.

Throwback to when we used to have 20-30 people ove

Low tight bowls are tough for me, even my grandmot

I made some twisty cane this week, with an extra b

Every time I make a glass piece with cane (stripes