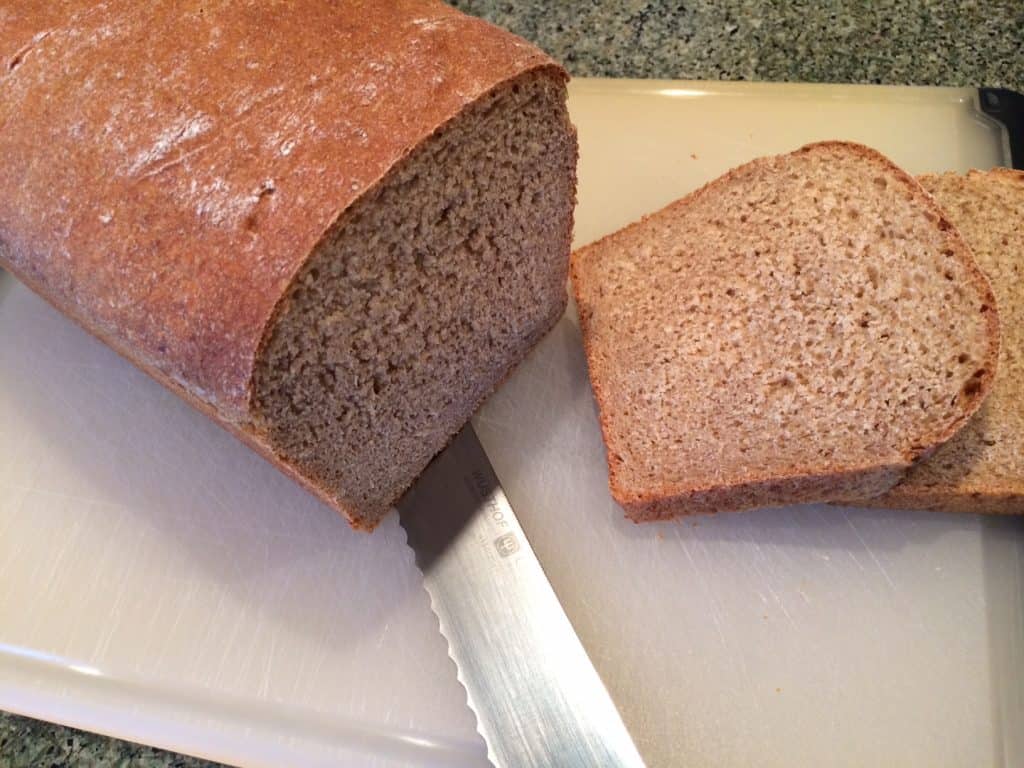 I am conflicted when it comes to whole wheat bread and this sprouted grain bread recipe, I’m just not sure who to believe. Are all grains bad for us, including whole wheat? Or are whole grains our saving grace and we should try to have several servings a day?

Sadly, there are many sources on each side of the debate, and I’m pretty sure I’m not qualified to wade through all of the science behind each argument to give my own informed opinion about who is right and who is wrong.

Here’s a really quick recap of the debate… those who oppose eating wheat appear to be avoiding gluten, as well as anti-nutrients and are quite expressive in the overall lack of nutrients available in cereal grains in general. There are even whole books devoted to the subject of how disastrous whole wheat and whole grains have been for humans.

Those on the other side of the aisle believe that we should be shoving down somewhere between 5 and 10 servings of whole grains each and every day. This theory states that by eating whole grains, we are increasing out fiber intake, which is good for healthy bowel function, and also reducing our risk of many diseases, such as heart disease and strokes.

So where to go from here? I’ve reached the point where I no longer believe that I should continually up my whole grain consumption to try and reach the FDA approved goal of one full serving of whole grains with each meal, if not more. And since the FDA has stated that they want half of my grain intake to be whole grains, that leaves another 3 servings of refined grains that the FDA is ok with. That’s not ok, not for me.

But I’m not ready to give up bread, pasta and other wheat products altogether. And since I’m not giving up on bread, I figure the best I can do is try to reduce my overall consumption of grains, while at the same time, try to make sure they are prepared in such a way as to make them as beneficial and nutritious as possible.

And that leads me to sprouted flour and grains.

Much like the benefits of eating sourdough bread, it appears that using either sprouted grains or sprouted flour enhances all of the benefits of grains while reducing many of the negative consequences. Remember the nasty things people have said about eating grains? The high gluten content, the anti-nutrients and low nutritional density? By using sprouted flour, gluten is reduced, anti-nutrients are broken down and the good nutrients in grains are made more accessible!

If you decide to go with this sprouted grain bread recipe, you can either sprout the grains yourself, or simply buy them. If you want to sprout them yourself, which I don’t, you’ll need to buy the whole grains, and then soak them for a period of time, usually measured in days, until they sprout just a tiny bit. Once they start to sprout, you’ll then need to dry them out, before grinding the now sprouted grains into flour. Or you can simply buy sprouted flour and let someone else do all the work.

So that was my major decision when making this bread recipe, whether to go with sprouted grains, or not. My other big choice was to decide whether to use modern flour, or to try and find an older flour to use that might be a healthier alternative. I’ve already come to the conclusion that modern wheat has been altered so much that it has very little in common with the crop grown just 50 or 100 years ago. But I must admit that my kitchen has not caught up with my readings, and I don’t have any sprouted and ground ancient wheat grains laying around (yet). So for today, I am working with modern wheat that has been sprouted and ground, but on my to do list is bread making with an ancient sprouted whole grain, such as Einkorn flour, with pictures to follow.

The recipe I chose to work with was from Peter Reinhart’s Whole Grain Breads book, which is great, if you like whole grains and bread. Instead of using readily available and commercially produced ground whole wheat, I used sprouted whole wheat flour, that I found at my local Whole Foods store. I also added some extra oat bran for flavor, and fiber (not sure if that’s a good idea or not), and substituted Einkorn flour for whole wheat flour for the small amount of flour needed for the final dough, but everything else should be pretty close to his recipe for Oat Bran Broom Bread. If you choose to give this a try, keep in mind that it will take two days, it doesn’t just fall together in a few minutes.