Last week, my wife and I visited our local Taco Deli for lunch and ordered one of their specials for the weekend.  It seems that on both Saturdays and Sundays they usually offer up a batch of pozole rojo soup, which my wife and I had never tried and felt it was our personal duty to remedy that deficiency.

We each had a bite or two, looked at each other, and I realized that I was going to have to learn how to make pozole rojo myself!  Luckily, it’s not nearly as difficult as I had feared and is actually fairly similar to my homemade chili con carne which I’ve made countless times to give me a little bit of confidence to move forward trying out this new recipe.

There was one new technique for me to learn in order to make pozole properly that I had never tried before.  In my chili recipe, I make a paste with dried chili powders that I bought, mix with water, and add to the chili for the bulk of the seasoning.  But that’s not what is called for when making pozole.  Instead, almost every recipe calls for using whole dried peppers, usually ancho peppers, and soaking those to rehydrate, and then chopping or blending those peppers to use in the soup recipe.

And if you have a Vitamix, or another brand of high powered blender, this is actually super easy.  I simply poured 4 cups really hot water to my Vitamix and then threw in 6 whole dried ancho peppers and let it sit for at least 30-45 minutes.  At that point, the ancho peppers have soaked for long enough, and you can simply blend into a nice smooth sauce to add to your pozole.

And just check out this picture, you can see why this version is pozole rojo!  There is a pozole verde, but that’s usually made with chicken, which is not happening today.

The main ingredient in this recipe, besides the ancho peppers, is the pork shoulder.  And not surprisingly, my views on sourcing pork haven’t changed much in the past few years… try to find and buy pastured pork when available and always avoid pork from concentrated animal food operations (CAFO’s) that produce sick animals full of antibiotics and added hormones.

So buy fresh, high quality products, and guess what, your recipes and your body will thank you!  Once you source your pork shoulder and found some dried ancho peppers, the rest of the ingredients kinda fall into place.  You’ll need an onion, organic of course, to avoid pesticides and nasty chemicals, but those are so easy to find in today’s grocery stores that it’s hardly worth mentioning!

But there was one ingredient that is pretty much a must-have in any traditional pozole rojo recipe that I was unfamiliar with.  Hominy.  I had heard of hominy, but always when someone was talking about grits and never really as an ingredient in and of itself.  Hominy is corn that has been treated in a specific manner, and then often canned and available in most grocery stores in the Mexican or World Flavors sections.  For those of you trying to avoid grains and maybe pursuing a Paleo or primal diet, this may throw you a bit, but I decided to go for it, and certainly didn’t regret it!

Quite a few of the other ingredients listed are used as garnishes, so feel free to use as much or as little as you like, but I can assure you the addition of the cabbage, radishes and avocado really round out this pozole rojo soup recipe!  It also counts towards your vegetable consumption, so pile it on!

To wrap up, I have tried to put together a nutrition panel, but as usual, they are harder to nail down than I would have thought!  In this case, I have no idea how much of each ingredient you may want to use for your garnishes, so I had to make a few guesses, and just assumed that most people would use all of my listed ingredients.  Also, how much soup do you like to put in a bowl for a serving?  I have no idea, and yet I have to guess how much you might eat when I put these panels together.  So I said 8 servings, but those are pretty generous sized servings.  If you pour small bowls, you can probably assume your calorie count will be less, but again please use these nutrition panels as a rough estimate and not an exact science. 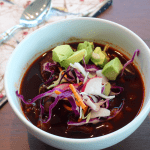