This single ingredient potato latkes recipe is not something that I came up with myself, but rather a recipe my wife forwarded to me from the New York Times cooking section recently.

I have already learned a few different latke recipes over the years, pretty hard to go wrong, including my grandmother’s, which I don’t believe had ever been written down, but rather remembered and passed along from generation to generation.

But this recipe seemed intriguing to me, as it contains only one ingredient, outside of the oil to fry the potato pancake in… potato. That’s it, potatoes.

And, to make it even more interesting, the article promised that I’d be able to do almost all of the prep work ahead of time, wait until dinner time to fry them up, and still have them turn out white on the inside without having oxidized a gross and yucky brown while waiting for me in the fridge.

This unconventional method requires you to bake your potatoes almost all the way through, but not quite, so that the finished spud still has a bit of starch inside.

After baking, you split your potatoes and grate them, I used a large hand grater but am sure that a food processor would also work, and because they have already been cooked, they won’t brown! Just form them into your latkes, cover them and slide them into your refrigerator until it is close to frying time.

Most everyone I know, both in real life or just having read online blogs, calls for frying in canola oil, which I won’t do. I understand the sentiment, a flavorless oil that doesn’t color your food and seems like you can really heat it up. But I consider it an abomination and not worthy of being used with so many other high quality, natural oils to choose from

And for my potato latkes, I choose either avocado oil or refined coconut oil, either one should work just fine.

I am excited to try these potato latkes out when we have guests over, as I’ll be able to get the messiest and most time consuming work done first before cooking time ever rolls around. 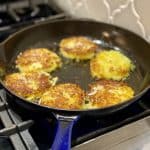 In The Hot Glass Studio:

END_OF_DOCUMENT_TOKEN_TO_BE_REPLACED

My Atlanta glassblowing rebirth has been many years in the making, almost 30 years after I was first introduced to glassblowing way …

END_OF_DOCUMENT_TOKEN_TO_BE_REPLACED

In my late 20's and 30's I pursued a glassblowing career, creating, marketing, selling and shipping hand made glass vases and bowls to …

END_OF_DOCUMENT_TOKEN_TO_BE_REPLACED

Basically took the summer off but finally made it

Yes, it’s true, I signed up and will be competin

Extending a thank you to @depantheman for the newe

If the only flour I use for pizza is Einkorn, it b