My son goes cuckoo for potatoes. Any kind, it doesn’t matter. But a potato gratin, or even just a little individual au gratin, just for him, will send him over the moon. And anything that I can do that makes my son love me just a bit longer, automatically becomes one of my favorites. Plus, it’s just so easy to make.

It takes a little time to do well, but it is very easy.

Most times I prepare this dish, I give myself plenty of time, between two and three hours, and start this potato gratin recipe at a low 250 degrees in the oven. But that is only after I have started the potatoes on the stove.

Yes, I know, that means an extra pot to clean, but in my experience it really makes the difference between an ok gratin and truly next level that your friends and family may actually talk about.

Starting on the stove also allows you to cut a few corners, but only if you have to, by skipping the long slow and low baking step. But again, I don’t really think it is worth skipping that step.

This is another recipe that I have adapted from Cook’s Illustrated, but it is still pretty close to the original au gratin potato recipe that I first tried years ago. I have quit measuring anything out, and just grab however many potatoes I feel that I need, and go from there.

I believe in one recipe that I read, heavy cream was used, which is delicious, but doesn’t heat up well the next day. Half and half, which is what I use now and have for the past few years, gives you left overs that don’t suffer at all from a few days in the fridge. So there is nothing wrong with making too much, hoping for a few extra servings that you might be able to sneak in over the next few days. Or in my son’s case, grab for breakfast at the first opportunity.

One last thought on this potato gratin… you can get half way through this recipe and take a break, and then finish up later, which makes it a great dish for dinner parties. Go ahead and prepare the potatoes, and get them heated on the stove top. But once you pour them into the baking or serving dish, you can cover the gratin, and stick it in the fridge for a few hours, or a day, and then pull it out, cheese it up and bake it, and no one will know the difference! 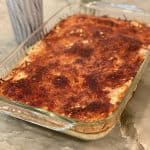 A very subdued holiday this year, but Auggie is ce