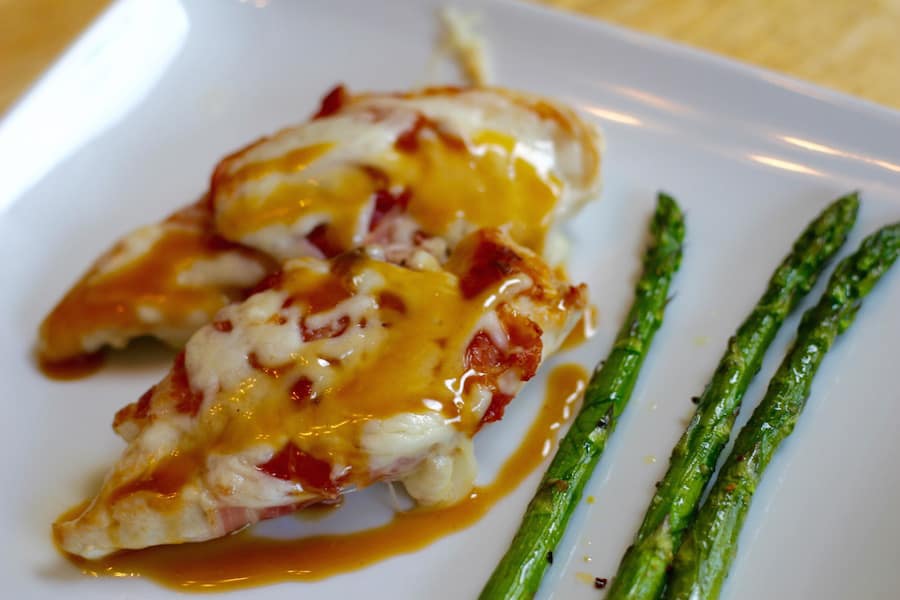 Back home in Louisville, there is a local Italian restaurant that serves a pretty awesome chicken saltimbocca entree that my kids are huge fans of. Sadly, my palate is not well defined enough to know exactly what goes into their recipe, but everything about it works well, the chicken, the pork, and sauce.

While I may not be talented enough to make an exact duplicate of the restaurant dish, that doesn’t mean that I haven’t at least tried a few of my own variations, to at least come up with one tasty and dependable recipe that I can pass down to my children. 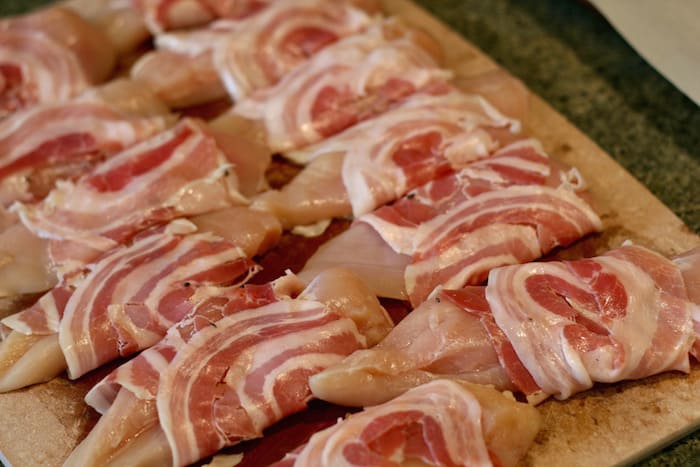 I won’t bore you with all of the variations I tried, but instead I’ll walk through this dish, which I’ve been calling my oven roasted chicken saltimbocca, even though it’s cooked on the stovetop just as much as in the oven.

Most chicken saltimbocca recipes that I’ve seen include chicken as the primary protein, with either prosciutto or pancetta wrapped around with cheese included at some point. And probably sage too, though I did find a few recipes that called for spinach.

I found that trying to include the cheese on the inside both increased the overall calorie count of the entire dish, plus made a much bigger mess in the pan. Which is why I finally switched to cooking up the chicken first, and then adding the cheese on top, and baking the mozzarella, more as a crust than a filling. 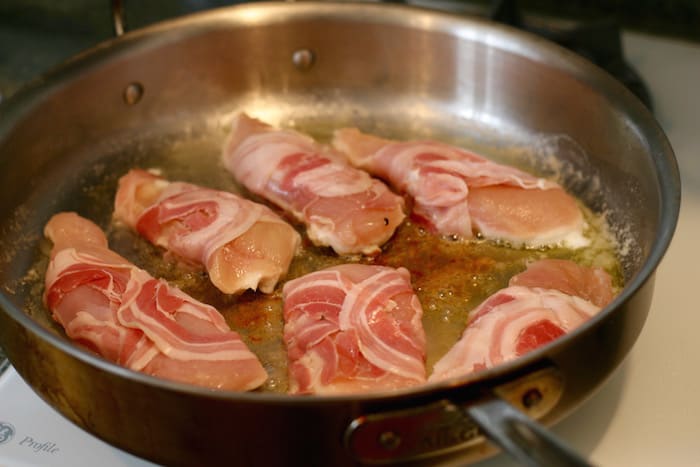 As far as choosing between prosciutto or pancetta, I can’t say that I have a preference, simply whichever one looks better to me when I am at the grocery. Sorry, I wish I had some profound rationale to differentiate between the two, but I love them both, and would be happy to sit down to dinner whenever either one was included.

Lately, when I’m in the mood to prepare this dish, I’ve been looking for split chicken breasts that have already been butterflied or filleted, called chicken cutlets. They are already cut very thinly and I have very little butchering to do when I get home. For my family of four, I look for six cutlets, or 12 pieces once I cut the filleted breasts into halves.

Lastly, when I think about it, I like to add one or two sage leaves to the chicken. I wrap up the sage between the chicken and pancetta and toss it right into the hot pan, and it lends a very nice addition to the dish. If I don’t have any sage on hand, I’ve been know to use basil leaves as well, but sadly, I don’t think I use enough to count as a full serving of vegetables. 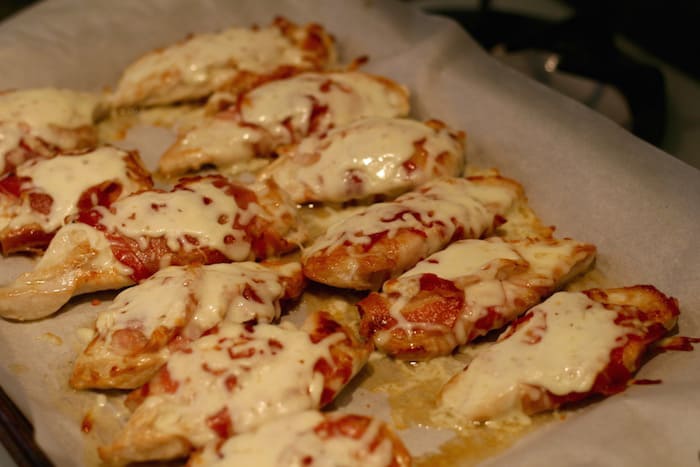 To finish my saltimbocca off, I love to have a pan sauce to drizzle over the top. It’s not necessary, but it is delicious, and very much appreciated by anyone eating your cooking.

The easiest way to get a quality pan sauce to the table is to use a quality chicken stock, like Kettle & Fire, which comes in two cup packages. I like to open up one container of chicken stock (they have several flavor options) and have it ready to go on the counter next to the stove.

Once you move the chicken from your pan to the tray, and sprinkle with cheese and place in the oven, pour your stock into your now empty chicken pan and scrape up any bits of chicken and pancetta from the bottom of the pan. Let this sauce reduce as your mozzarella melts, and when you get down to a consistency that you are pretty happy with, add two or three tablespoons of butter, turn the heat off and let the butter gently melt into the sauce.

With a little luck, if you have timed everything well, the sauce will just be finished when the cheese is nicely browned and bubbly on the chicken, time to eat! 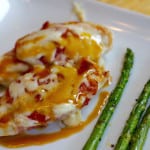 Sometimes it’s really helpful to try to assemble these nutrition panels, just to give myself an idea of what I have actually been eating for years and years without really having thought about it! For instance, when making this oven roasted chicken saltimbocca recipe, I never even bothered to think about how much cheese goes on each piece of chicken. But without knowing how much cheese I use, or how much pancetta, it’s pretty tough to have a realistic idea of what I’m sitting down to eat for dinner.

And to be clear, this nutritional breakdown is for the chicken, pancetta and cheese only, I have no idea what kind of sauce you might choose to dress up your dish with. For me, I simply use a very reduced chicken stock pan sauce with a few tabs of butter, so it will certainly add to the calorie and fat content of the overall dish. Maybe I should figure that out one day.

Also, using the amounts of chicken stated above gives you four really large portions, three finished pieces. Most people eat only one or two pieces for dinner, leaving some for leftovers, and a much lower caloric load than what would first appear on the nutritional panel below. 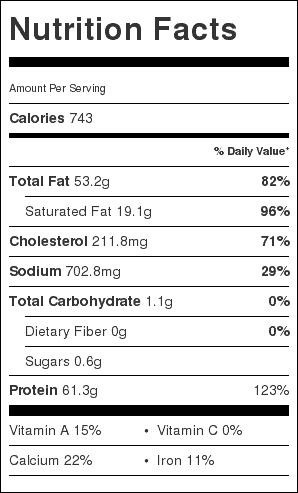