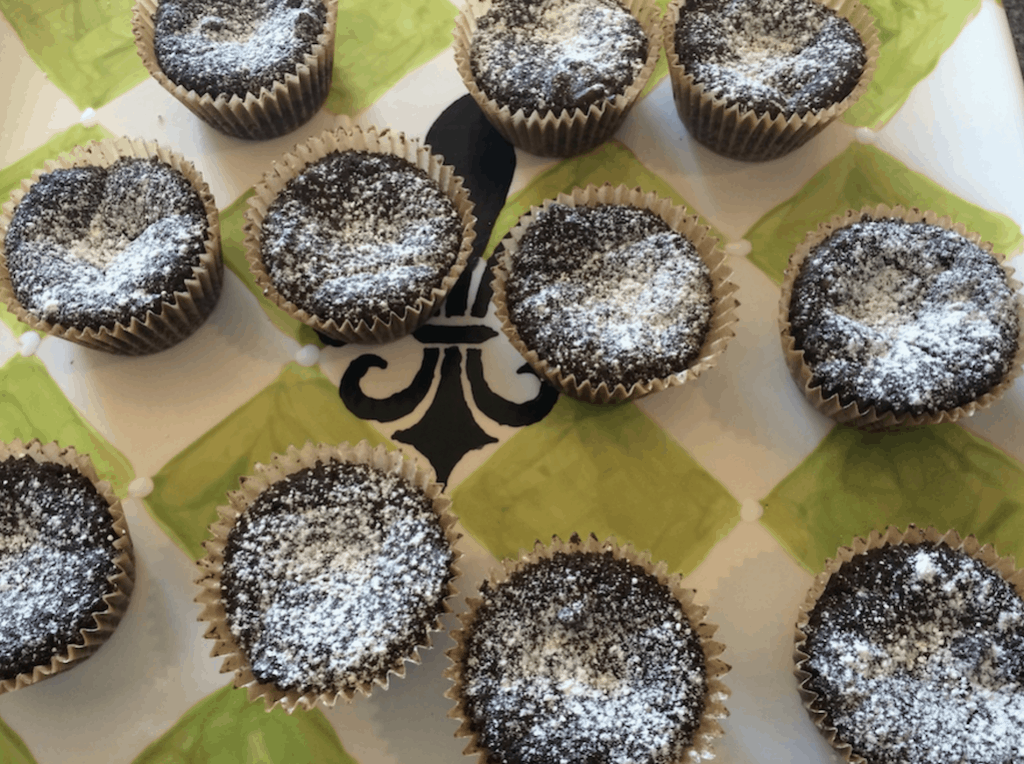 As I’ve stated before, I’m pretty sure I haven’t totally bought in to the gluten free trend that is so prevalent right now. On one hand, I do believe that eating too much flour is detrimental to a person’s health. But on the other hand, I’m not sold on gluten being the only culprit, with other prime suspects still at hand, such as modern wheat production techniques or massive sugar consumption.

While I may not commit to ever going gluten free, I certainly see the benefits of reducing my family’s exposure to wheat, especially modern wheat, which contains many more negative consequences for your health than alternative ancestral wheat.

So when it comes time to make brownies with the kids, do I go with gluten free coconut flour brownies? Or give myself permission to throw some flour in there and just go with the flow?

Lucky for me, my daughter found the answer when looking through one of my cookbooks recently, Bouchon Bakery by Thomas Keller. She found a beautiful picture of small gooey brownies, that the cookbook called a bouchon (cork in French, which the brownies in the book look like). And they contained relatively little flour, which meant to me that if they turned out well, that it would hopefully be a pretty easy recipe to convert to paleo friendly or gluten free coconut flour brownies.

So first we had to try the recipe as printed, with white flour, just to make sure we were on to something. And we were! They were/are great, I would totally recommend the original recipe for anyone who isn’t afraid of flour and not looking to reduce their gluten load.

The next challenge, besides not eating too many, was converting the flour content over to something a bit more desirable than conventional white flour. I have not yet tried using sprouted Einkorn Flour, but rest assured that will be coming soon, it seems to be such an obvious choice. But another obvious choice, for me at least, was coconut flour, a great “whole food” alternative, even if it has a few odd cooking characteristics.

So now it’s time to work my way through the ingredients list and make sure that I’m using the wisest and healthiest choices available. First, the butter. Always go for organic butter, and when possible, find pasture butter made from cows who are allowed to wander real life fields and eat what cows have been designed to eat, grass! Stay away from the more conventional butter made from cows confined in horrible conditions and fed an unnatural diet of genetically modified grains.

The same holds true for eggs. When you can, find eggs that come from chickens that are allowed to be chickens. As simple as that sounds, it can be a bit harder than it should be. Look for eggs that come from chickens that get most or all of their feed from organic pastures and are allowed to wander freely to forage. Stay away from conventional eggs from chickens crammed in small cages and force fed an unnatural and unhealthy diet, that result in nutritionally deficient eggs.

Sugar aside, the rest of the ingredients don’t need too much consideration, they are either too insignificant to worry about, or they are niche ingredients that don’t often come in adulterated forms that we need to be very worried about. Just get the highest quality ingredient you are comfortable with. 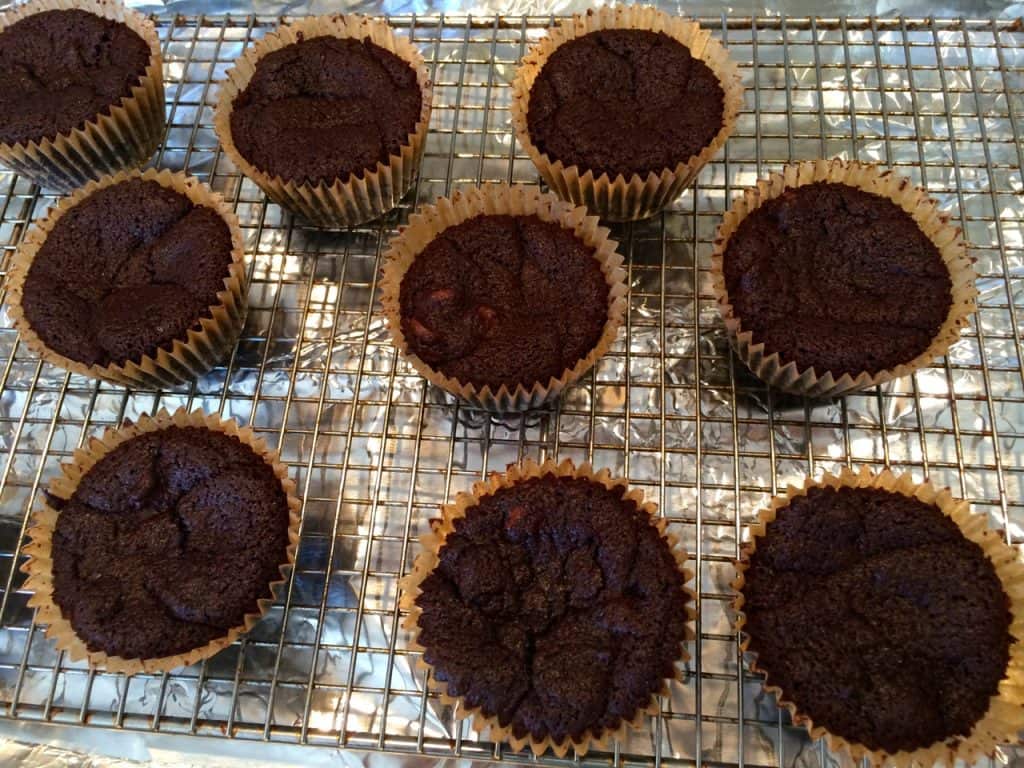 But sugar, and the chocolate chips, do deserve a bit of scrutiny. Not only because I want the best sweetener in my brownies, but because it’s important to note that we consume too much sugar. And just because a recipe is gluten free doesn’t make it healthy, I don’t need/get to eat dozens of these gluten free coconut flour brownies at one sitting. Make sure you approach a recipe like this one as a treat, every once in a while, and not too often. It is not very difficult to become unhealthy, and gain weight in the process, by eating way too much “healthy” gluten free food.

However, when splurging, and making a dessert like these brownies, I do like to at least consider the sugar content. My first choice would be to exchange honey for the sugar, but in this recipe I am worried that the resulting brownie would be too runny, with not enough body to hold together long enough to be eaten!

If honey is a no go, thought I still may try it just to see what happens, my preference would be to with a minimally processed sugar. I could go with Sucanat, but I find that I don’t use it up very often with other recipes. So I end up buying organic cane sugar most often, as my go to sugar, just because I can use it for just about anything, is relatively unprocessed and contains at least a few trace minerals and elements that make me feel better about myself, even if they exist in too small of quantities to be truly nutritious.

Lastly, chocolate chips. It turns out the biggest challenge for me when buying chocolate chips is making sure there are no soy ingredients included. Who would have thought it would be that difficult? With a little searching, you can find a few brands who make exactly such a product, with no soy products, like soy lecithin. But I don’t spend much time worrying about soy lecithin, not after reading Chris Kresser’s article about why I shouldn’t worry about it! So go ahead and buy your favorite brand of chocolate and don’t worry too much. 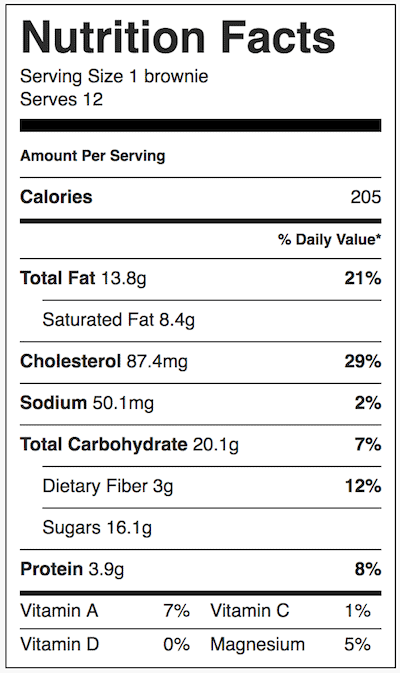