I’ve tried patatas bravas at all sorts of restaurants, most in the US, but a few in Spain as well, and I’m sure my experience has been very similar to most… that is to say, a few were exceptional and made me want more, but most were disappointing and made me feel like I could figure out how to do better at home.

And so I tried. And kinda sorta succeeded! But to be fair, and upfront, I did not go with the whole deep fried potato route with two separate sauces. I dumbed it down for my own sake and skill set, and used my pan roasted potato recipe since I am not that into deep frying, and then threw together a spicy mayo to stand in for the two separate sauces you might find with a few traditional recipes.

So spare me the complaints about these not being traditional patatas bravas, I know… they’re not, they are my “fake” version. But lucky for me, and maybe even you, they are still delicious!

In my first iteration of the spicy mayo, I grabbed a jar of Primal Kitchen Chipotle Lime Mayo (this is where I’ve been told I should add in an Amazon affiliate link to make $0.05 a month, no thanks) and added a few ingredients to it to spice it up. It was fine, was actually pretty good. But why start with the packaged mayo when I could just make my own from scratch without taking any longer in the kitchen?

If you have the right tools, there is nothing difficult about making a spicy mayo at home aside from adding everything into a large measuring cup that is large enough to handle an immersion blender, maybe six cup capacity, and letting the tools do the work.

It’s so good, and goes on almost anything. Seriously, one of my best pseudo-creations ever! Just throw all of the ingredients into the measuring cup pitcher, whip it all together with my stick blender, and then pour it into a cool squeeze bottle dispenser so all the popular kids think you’re cool!

One more reason I like this patatas bravas sauce so much, besides how tasty it is? It is so easy, that it takes only 15 minutes or so to make, which means that you can start your pan roasted potatoes, hang out a bit, and still have plenty of time to make this sauce before serving dinner! 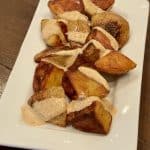 One last question about this recipe,…is it healthy?

My short answer is yes, just don’t eat the entire recipe in one sitting! It’s full of fat, but good fats, from avocados, and nothing that I would consider processed or overly-processed. It’s a wonderful, fatty and healthy addition to my dinners, especially considering that it helps me eat more of my vegetables.

And you don’t actually use very much of it at any given time (usually!) Here is a nutritional breakdown of a serving of this spicy mayo, which I have guestimated at 2 tablespoons per serving, and there just doesn’t appear there is much here to be worried about.

2nd race in the books, 2nd silver medal, once agai