As of last week, I had never made homemade tortillas.  Not that I’m against eating them, I just haven’t ever gotten around to making my own.  Then again, on some levels, I probably do have a problem with tortillas in general.

Some of the store bought tortillas that I’ve looked at contain a few ingredients that I would rather not bring home, like canola oil or soybean oil.  Also, I find it so easy to blow right past any calorie or carb counting limits when I eat breads that sometimes it is easier just to avoid them altogether.

But other times… well, sometimes it’s totally worth it!  So when I asked my kids what they thought I should make for dinner a few nights ago, they reminded me of my New Year’s Resolution of trying something new in the kitchen at least a few times a month.  And so I set out to make some tortillas that worked well with my ever evolving food philosophy, Einkorn wheat flour tortillas.

I’ve probably covered this subject too many times by now, but I am not a huge fan of modern wheat.  I certainly eat it from time to time, but I would always prefer to eat homemade wheat products whenever possible.  And when I use flour at home, unless I absolutely “need” a white nutritional empty flour, Einkorn wheat is my go to.

So far, I have tried these tortillas using only a high extraction Einkorn flour that I can find in my local Whole Foods, not the sprouted whole wheat flour that seems to be available only through online outlets, though that might be next.

Not only would making tortillas at home allow me to control the type of wheat I wanted to use, but I could control all of the other ingredients as well.  And to fit into my schedule, that means only a few ingredients and not too much time!

The recipe I finally settled on has only four ingredients, and takes only 10 minutes, maybe even less, to measure out and combine.  There is a bit of down time as you let the dough rest before pressing out the tortillas, but it really was much easier from beginning to end than I had hoped for.

After looking at a few other recipes that I found, and trying one or two, I finally settled on using only Einkorn wheat flour, salt, olive oil and hot water.  And since we were going to eat them the same evening that I made them, there’s absolutely nothing to worry about in regards to preservatives or freezing them.  Mix it, press it, eat it, that’s how it works in our house.

My biggest complaint with the whole evening is that in my attempt not to spend much money, I bought the smallest cheapest tortilla press I could find.  Guess what?  I regret that decision.  I should have spent a little more, and instead of buying a 6.5 inch press, gone straight for the 8 inch model, which at $25 still isn’t very expensive if you think you might make these every now and then, which we certainly will. 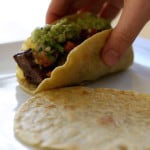 …and for those of us who like to track calories and macro-nutrients, how about a nutrition panel?  This nutritional panel is an estimate of the breakdown for each 6″ tortilla that this recipe makes.  Notice that I said “estimate”, that is the appropriate word, this is not an exact science.