I know bread is supposed to be “bad” for us, that it’s either partially or fully responsible for most of today’s dietary ills, depending upon which article or book you are reading.  But I don’t buy it.  I’m still of the opinion that bread itself is not the culprit, but rather modern bread made with modern wheat.

And that’s why when I’m in the mood for some type of bread, I go with Einkorn flour instead of modern dwarf wheat.  Even when I’m making banana bread.  For most bread recipes, Einkorn wheat works very differently than the flour we are used to, it absorbs liquids much slower and you’ll find that it will take a bit of adjustment if you try to swap flours out, it is not a straight one to one substitution.

Which is why I was initially worried about this Einkorn flour banana bread recipe.  But it came together very quickly, and easily, turns out I didn’t have much to worry about.  And because it’s a quick bread, no yeast involved, I could lean more towards a batter than trying to work out the difficulties of exact proportions of ingredients to make the perfect dough.

This Einkorn flour banana bread recipe probably has more butter and eggs in it than many other banana bread recipes that you’ll see.  But again, because I am not fat phobic, I have no problem adding extra to my recipe.  Having said that, it does up the calorie count a bit, so I like to think of this as more of a dessert bread than sandwich bread, or something to have several times a day.

Just about everything else about this recipe should be very similar to just about any other banana bread recipe you’ll find.  Mix all of the ingredients together, either by hand or in a stand mixer, pour into a loaf pan, and bake it up.

Unlike some other recipes, this one was actually pretty easy to nail down the nutritional facts.  Aside from the problem of trying to gauge how much banana is included in the recipe, yours might be a little bit more or a little less, everything else should be pretty standard.  Once the loaf was baked, I was able to weigh the entire banana bread loaf, divide by 12 equal portions, each weighing about 65 grams, to calculate the macro-nutrient values below. 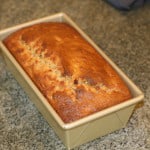