I’ve always loved a good fried chicken recipe, sometimes I’m even pretty happy with bad fried chicken.  But up until my late thirties or early forties, I would have laughed at anyone suggesting that I fry my chicken using coconut oil.  But look at me now.  Canola oil is gone.  So is my old vegetable oil, and Crisco certainly can’t be found in my house anymore.  So what’s a boy to do?

Thankfully, with fried chicken, there really aren’t too many moving parts to rethink now that I have moved to a real food based diet.  The most important three ingredients to rethink are the frying oil, the chicken itself, and the buttermilk marinade, or brine.

And whether or not I should really be eating fried chicken, but sometimes we gotta do what we gotta do!

What Kind Of Bird To Use For Fried Chicken

In my mind, there really aren’t too many complicated decisions to make when buying chicken, or most any meat.  My overriding rule is to ensure that I don’t purchase any animals that were raised within the confines of a CAFO, or concentrated animal farming operation.  Wow, once you read about those facilities, I assume (hope) you will feel the same way, pretty disturbing.  Not only am I convinced that trying to eat more locally produced meat is more nutritious, but I also believe it is a more morally desirable way to be engaged with the food production system, of which I am a tiny cog.

Whether or not you want to go all the way and buy only organic locally raised chickens raised only on rolling pastures of countryside, that’s your call.  Myself, I find those birds are appropriately expensive when compared to factory chickens, about $20 for a four pound bird and not especially tasty, a little gamey for me.  Perhaps my tastes will mature one day as my moral compass continues to push me in that direction.

But for now, I continue to try to do better than I have done in the past, and am pretty satisfied with avoiding CAFO produced meat, and purchasing organic birds that have not been raised in overcrowded barns.  If you shop at a store similar to Whole Foods, you can find chickens that are graded on a 1 to 5 scale depending upon how humanely they have been raised.  At this point in my culinary growth, I try to find chickens that rate a 3 or 4 on the Whole Foods Animal Welfare Standards.

OK, so I know which chicken I will be using.  But what about the buttermilk brine that is so important to this delicious fried chicken recipe?  Again, if possible I like to keep it local.  I am not going to soak my chicken for hours and hours in some chemical filled low fat buttermilk brine, because low fat has no place in my home.

But what is “real” buttermilk? Does full fat buttermilk even exist, is it real? Buttermilk is made when butter and everything it takes to make butter is removed from the fresh milk provided. That’s a whole lot of fat taken out of the milk, not leaving a lot behind for the buttermilk. Which means you can’t really have full fat buttermilk.

But most buttermilk available today is actually cultured milk, and not a leftover product when making butter. Cultured, like yogurt. When I buy and eat yogurt, I try to find yogurt made with whole milk and avoid the low fat options. Same with modern buttermilk, you can sometimes find buttermilk made with whole milk instead of skim. Bottom line, I like to stay away from the low fat options, because I think skim milk is gross. And I don’t want to include gross ingredients in my recipe. But it is hard to find.

Humanely raised chickens (relatively speaking), and buttermilk produced from happy healthy cows. So far, so good. But what about the frying oil? As I said earlier, I no longer have any vegetable oil of any kind in my house, I am simply too concerned with elevated Omega 6 levels, GMOs and consuming too many poly-unsaturated fats. So I have moved on to cooking with saturated and monounsaturated fats, such as butter, coconut oil and olive oil. I know some people would naturally gravitate towards olive oil, but seeing as it’s primarily made up of mono-saturated fats, the high heat of cooking or frying might prove to be damaging to the molecular and nutritional make up of the olive oil.

Also, olive oil tastes very much like olives, shocking.  And as much as I like fried chicken, I don’t think I would like it as much if it were olivey.  So, because there are so many health benefits to coconut oil, refined coconut oil is my solution.  Unrefined coconut oil would taste a bit like coconut, which may be a little off-putting for most people.

Refined coconut oil, on the other hand, has been mildly processed, and shouldn’t smell or taste too much like coconut at all, which makes it a perfect oil for frying chicken.  But stay away from any coconut oil that has RBD on its label, for Refined, Bleached and Deodorized.  That kind of oil may be partly, or entirely, hydrogenized, which is trans-fat, and absolutely a no-no.  As always, read the label.

I have heard that avocado oil makes a nice stand in for coconut oil here, if desired. I have yet to try it, but will soon, and probably chicken fat as well as pork lard. All seem to be decent options, but will likely bring a little different smell to your kitchen and taste to your chicken.

Ok, thinking about it, maybe I lied earlier, it seems there might be more to think of when making fried chicken with coconut oil than I had thought.  What about the flour I should use when dredging my chicken?  Traditionally, white flour is called for, which I still have in my house even though many people have named it one of the most horrific foods ever.

Whole wheat?  I can’t even bring myself to really give that a try.  What’s the point of making a dish if no one is going to eat it?  It still has to taste good.  And when moving over to “real food” I believe it should still taste like the dish you are trying to replace.  Basically, my recipe had better taste like good fried chicken, or no one is going to eat, and what’s the point in that?

And should I even think about trying to make this gluten free? Maybe go with an almond flour crust and not even conventional flour? Maybe in the future, after I work out my basic fried chicken recipe, then I’ll circle back around and work on my gluten free fried chicken, but not yet!

So yes, I cheated, and used modern day white flour.  But at least it was organic, non-bleached and non-bromated.  One move I might make towards making my flour a bit less offensive is to use an ancient flour, such as Einkorn, that does not contain the same levels of gluten that our modern wheat does.  But that gets me back to the taste of whole wheat, which just doesn’t work for me and fried chicken.  But if I use a high extraction ancient whole wheat, one in which most of the bran and germ have been removed, then it might be close enough to white wheat that it would be a passable substitute.  I’ll let you know if I ever try it. 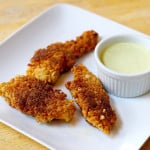 This may be the most difficult recipe to get a nutritional panel assembled compared to the others I’ve put together for my recipes.  I suppose any recipe that involves brining, breading and dredging make nutrition much more difficult to calculate.

So here are my disclaimers and guesses, from an earlier iteration of my recipe… I used three cups buttermilk for the brine, but assumed that only 1 cup of it made it’s way to the final dish, and that might be high, I didn’t really measure, just a guess.  Same kind of calculations for the flour, I used three cups of flour but guessed that only half of that showed up on my plate.  And finally, I speculated that 1/2 cup coconut oil would still be present on my fried chicken when it came time to eat.  I didn’t really bother with adjusting the spice amounts, not because I believe that they all make it to the finished dish, but because they don’t really matter when counting nutrition values.

2nd race in the books, 2nd silver medal, once agai

First of two races at the Senior Games in the book

Getting warm in the hot shop… Swamp Ass warning!