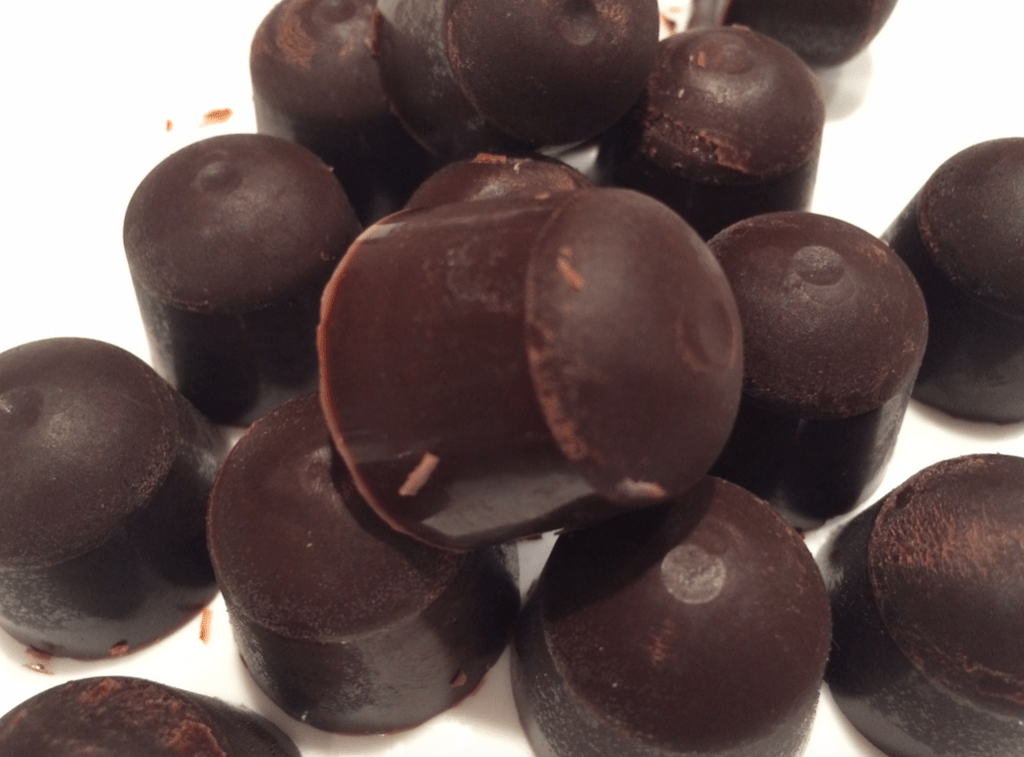 Ok, this one will be short and sweet, literally. I’ve been on a bit of a coconut bender lately, looking for a variety of ways to introduce all things coconut into the foods I cook. Coconut flour, coconut oil, shredded coconut… it just doesn’t matter at this point, I’m willing to give it a try.

But my wife and kids have not been as quick to see the wisdom of my ways, so I had to take a different approach. No more coconut oil straight up, that’s pretty hard to stomach for a lot of people, and shredded coconut isn’t very appealing to family members who haven’t yet realized that they love coconut as much as I do.

So what to do? How about a dessert? Something that doesn’t taste like coconut, unless you want it to, and that is quick, easy and delicious! Yep, coconut oil chocolates.

I have now totally bought in on the reported health benefits of eating more coconut oil, instead of consuming more vegetable oils. But it is a bit easier said than done when trying to find ways of including coconut oil in everyday meals. So today I’ve decided to work on a dessert that I am sure my wife and kids will love, and that contains a smallish to decent amount of coconut oil.

If I were making this recipe for just myself, then I would no doubt use a very high quality unrefined coconut oil. But because unrefined oil actually smells and tastes a bit of coconut, two of my family members would not be very excited about those chocolates. So I have opted to use a refined oil, that still has many of the same health benefits, but no longer smells or tastes like coconut.

Because I am going to add my own sugar to this chocolate, I don’t need sweetened cocoa powder, so I make sure to use only unsweetened cocoa powder. I don’t yet know enough about the different kinds of cocoa powder to make any definitive statements on what kind might be better than another, but my natural inclination would be to purchase an organic powder if given the chance.

The first recipe I saw for coconut oil chocolate included a total of 3/4 cups of honey, which seemed like a lot to me. I also thought that much honey might work to blunt some of the dark chocolate flavor of the cocoa powder, which would sadden me. And my final sugar concern was that if all of the sweetness was in the same form, that the final product might be too one dimensional, too honey-ish, so I decided to drop the final amount of honey I used, but add in a few tablespoons of molasses.

If you like your chocolate a bit dark, and not too sweet, then this mixture ought to work quite well for you. Of course, when choosing my sweetener, artificial sweeteners are out, and I no longer use bleached and refined white sugar, so there was no reason to look for any other sweetener than the honey called for in the original recipe that I found.

And of course, a little pinch of salt always goes nicely with chocolate. So I add just a bit of salt to these coconut oil chocolates, but I make sure that my salt is the real deal, a nice sea salt instead of table salt that has been bleached and treated with all sorts of chemicals that likely are dangerous and certainly affect the taste of the final product.