No question about it, this is my all time favorite cinnamon bun recipe. It is such a hit in my house that it has become the “go-to” breakfast for Christmas morning, or any other special event that my kids can think of, such as their birthdays, other people’s birthdays, family gatherings… it doesn’t stop!

It took me years and years to find this cinnamon bun recipe, and goodness knows that I tried all sorts, some decent, some awful, and all not quite what I was looking for. But finally, one year, my mother gave me Peter Reinhart’s The Bread Baker’s Apprentice, which is a fabulous book. And in it, I found the secret. Instead of using a normal dough, or a biscuit based recipe, the best sticky buns and cinnamon buns come from using brioche as the dough. I have made a few changes to the recipe, in recognition of my schedule and personal tastes, and now have a recipe that I can trust to produce all sorts of compliments each and every time I serve them!

Give yourself plenty of time, this is not a recipe that comes together in just an hour or two, but the results will be so worth your effort! Also, a heavy duty stand mixer is a must! I wouldn’t dream of trying to make these without my Kitchen Aid!

Clearly, this recipe does not match up in any plausible way with my over-arching life goal of eating real, whole foods that fill my body with nutrients and healthy vitamins and minerals all day long.  But there’s no way that I won’t make these cinnamon buns at least a few times a year, so how do I square those two contradictory impulses?

Instead of skipping this recipe altogether, and risk losing the love and affection of my children, and maybe a few siblings and cousins as well, I will continue to whip these up every so often, but will do my best to ensure all of the ingredients are the very best that they can be, given of course, that I am making a decadent calorific nutritionally empty carbohydrate laden treat.

OK, no getting around this, I realize that many of my readers really, really don’t like flour, at all.  Well, I guess this recipe isn’t for those readers.  I am not against flour, I simply try to eat less of it than I used to, and pay attention to any physical signs that my body doesn’t like it so much.  It hasn’t happened yet.  But to be safe, and responsible, when bringing flour into my house, I always try to buy organic, unbleached and unbromated flour.

Sugar is another ingredient like flour, there are loads of people out there trying really hard to avoid any and all sugar.  I am not one of those people, I use less than I used to, but that doesn’t mean that I haven’t thought at least a little bit about the sugar I use when cooking for my family.  I know it’s only a tiny difference, but instead of buying the super refined sugar produced by the mega corporations, I now buy organic cane sugar.  Same with salt, no more table processed blindingly white table salt, but rather a more natural sea salt with trace amounts of other minerals that everybody needs to be healthy and happy.

Butter, milk and eggs are next… and I find that there are very easy to deal with.  Since I don’t dig low fat foods, I use only whole milk (low temp pasteurized and non-homogenized) and real butter, no margarine or Crisco in my house.  Also, my butter comes only from pastured raised cows, so I can make sure to get more of the natural goodness found in butter.  Same thinking is applied to eggs, I use only eggs that are laid by pastured raised hens, because they are so much better, and better for you, than the standard eggs found in the large scale grocery stores.

Please don’t ask about the icing for the cinnamon bun recipe, I still haven’t found any decent ways out of that one, I’m sure the powdered sugar is totally atrocious, sorry.

One last thought when preparing these cinnamon rolls… I always cut the ends off the roll before diving into individually sized rolls, which means some percentage of your overall caloric count will end up in these relatively cinnamon-less end pieces.  Still yummy, but not the same thing as the center cut rolls!

And then comes the big decision… do you go for eight huge rolls, that will likely rise up over the top of the pan and might be too large for any person to responsibly eat on their own?  Or do you go for 12 more modestly sized rolls, as I show in the picture above?  I go back and forth and won’t pretend to give you the “right” answer here.  As with most things in life, it depends. 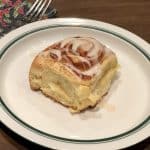