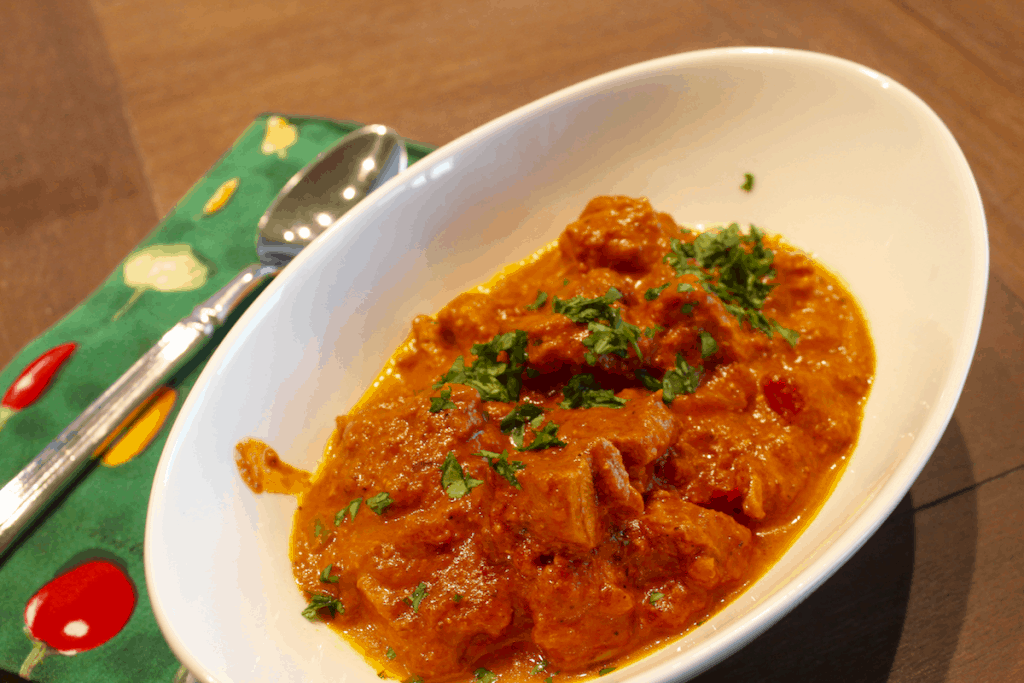 Whenever my wife and I go out for an Indian dinner, I almost always gravitate to the chicken tikka masala. It’s right in my comfort zone, both with the heat levels as well as the flavors. My wife and son often go for spicier foods, but for me, the tang and creaminess of the yogurt and cream in the tikka masala make it almost irresistible. Which is why it is long past time for me to figure out how to make this dish at home!

The good news is that it wasn’t as difficult, or as time consuming, as I had feared. It might not be a weeknight meal, depending upon your employment, but it also won’t take up a full weekend day. If you can spare two hours then you can have freshly made chicken tikka masala on your table, from beginning to end with maybe even a little time left over, depends upon how slow you are in the kitchen! 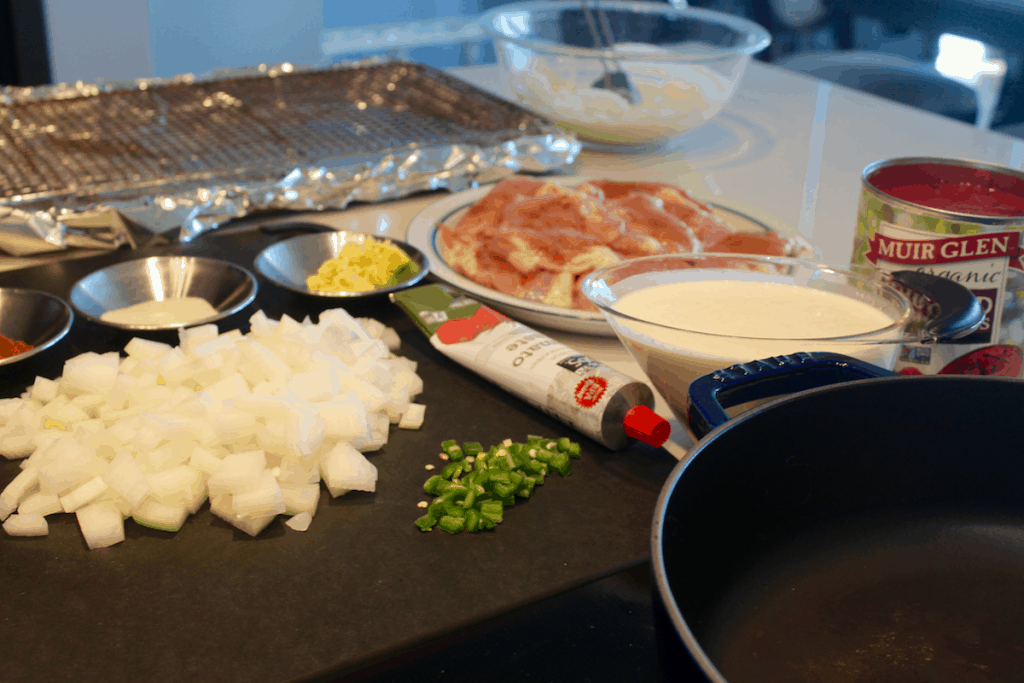 The inspiration for this recipe came from America’s Test Kitchen, but I made a few alterations to better suit my kitchen and cooking philosophy. For instance, they called for using vegetable oil, which is a swear word in my house. And they also called for chicken breasts, which I generally avoid because they are so boring and tasteless, preferring to use chicken thighs instead.

Once I made this a few times, it became very simple. There are two basic components, that you will mix towards the end. First, you’ll need to work on the chicken, trying to establish some flavor above and beyond what a slow cooker could provide. And then you’ll work on the sauce that this dish is so famous for. That’s really it, two processes to figure out and combine, and boom, it all comes together! 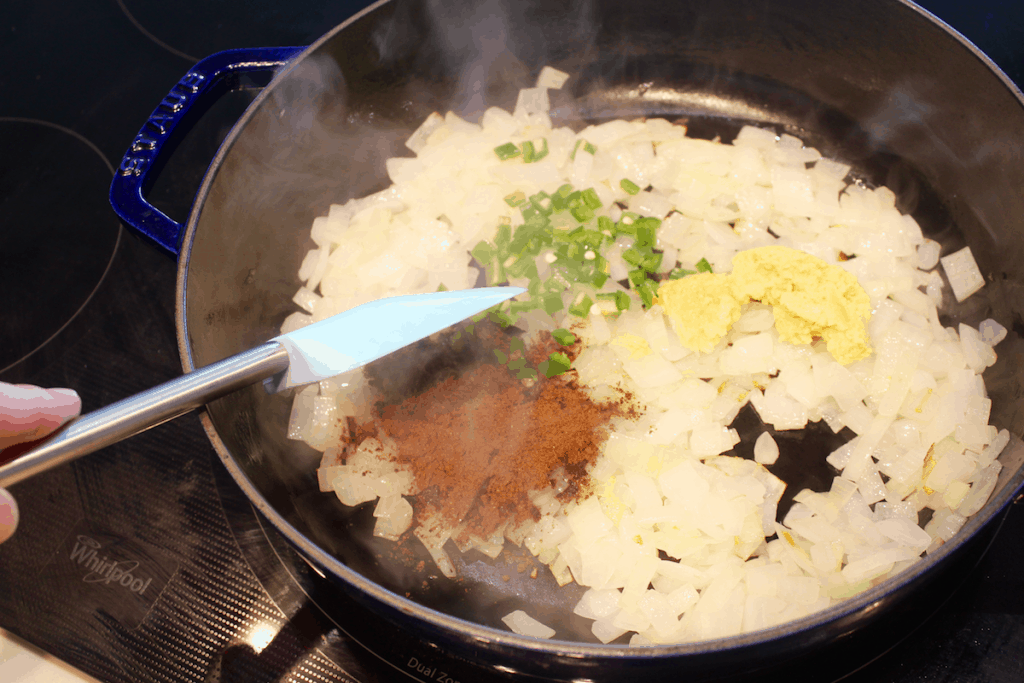 Anyone who reads my blog on a somewhat regular basis knows that I like to consider my ingredients carefully, most of the time, to make sure I am not feeding my family overly processed food that proves detrimental instead of nourishing. I am pleased to say that this recipe needed very little tweaking to achieve my approval.

Of course, I mentioned that the original recipe called for vegetable oil, in two different places, and that is a non-starter. But what a great place for coconut oil! And the rest of the dish is basically vegetables, stock, cream and spices, all of which are pretty easy to source responsibly to avoid as much harmful byproducts as possible.

And the chicken. This recipe definitely calls for chicken. Again, the original recipe that I amended called for chicken breasts, but I try and opt for thighs as often as possible. Especially in any kind of stew or soup that might simmer for awhile, the thighs will hold up much better than breasts. And is my habit now, I look for organic chicken that has been fed a clean diet and hopefully has gotten to live it’s life as a chicken should, and not cooped up in some over-crowded factory. Yes, it costs a bit more, but it’s worth it in my mind, both for moral and health reasons. 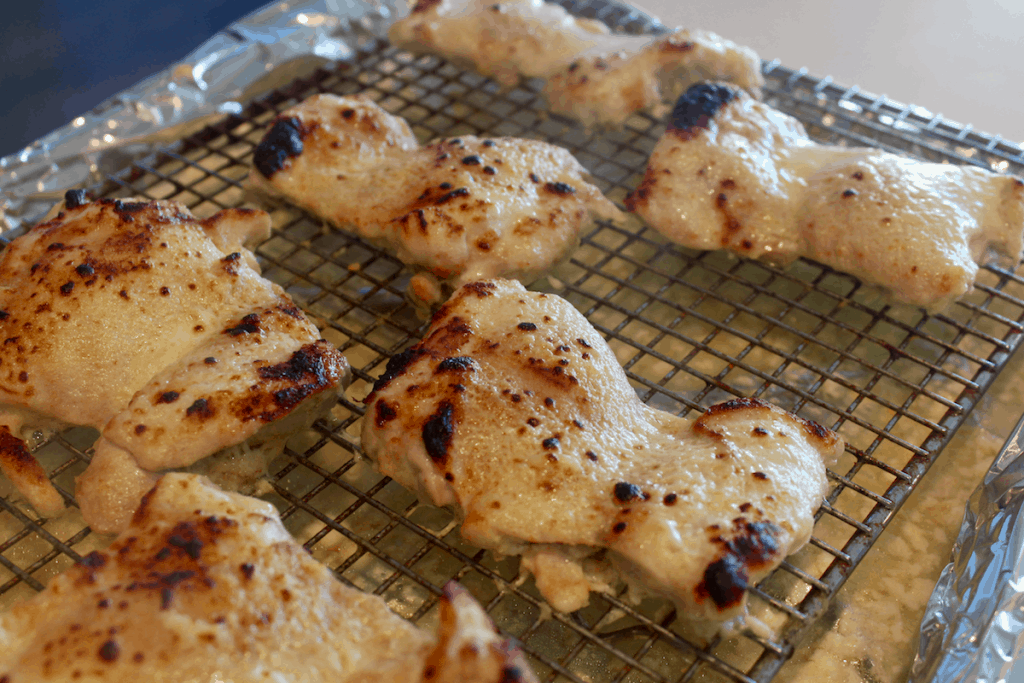 The chicken was a small adventure, as it required a new technique, for me at least. Trying to replicate a traditional tandoori oven, with the charred flavor and aroma, I followed the suggestions of America’s Test Kitchen. The chicken was coated with full fat yogurt, and some ginger and garlic, and then broiled (pictured above.)

The greatest part of cooking the chicken under the broiler, besides actually working, is that you can tackle the chicken while the sauce is slowly simmering on the stove, so it doesn’t actually extend the overall cooking time!

If you’ve ever made a chili, or even a stew with some seasonings, the sauce for this chicken tikka masala recipe will look very similar. Maybe not the spices, but how the sauce is built. Start sweating the onions, then add the spices and let them cook until fragrant, and then you can add your liquids and let all of the flavors meld and blend while the sauce simmers and reduces slightly.

I like my sauce to be more on the wet stew side as opposed to a solid tomato side dish, so I added some chicken stock, above and beyond what I have seen called for in other recipes. And I also decided to use my immersion blender to smooth the tomatoes out a little. I didn’t blend until smooth, but certainly chopped up the largest chunks of vegetables, but use your judgement and blend as your tastes dictate. 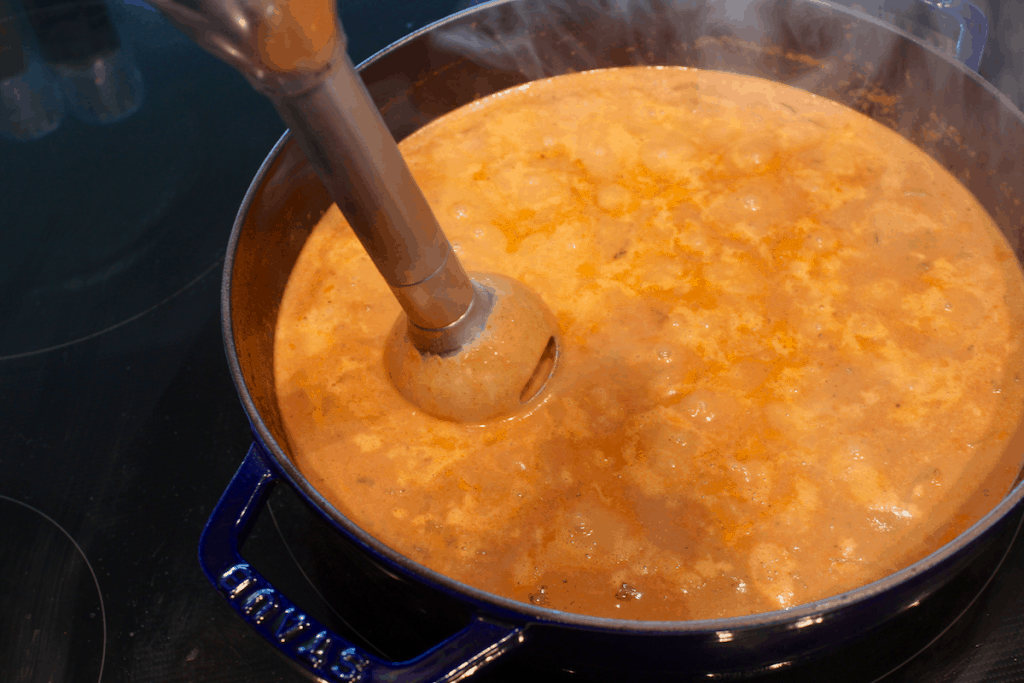 And to wrap it all up, to make this as much of a one bowl meal as possible, I like to ditch the white rice that you’d find accompanying this dish in a restaurant, and replace it with riced cauliflower. Cauliflower has become so popular now that you can likely find a bag of riced cauliflower in your frozen foods section at your local grocery store. Just microwave for a few minutes when it’s almost time to eat, dish out into each bowl, maybe garnish with some chopped cilantro if you like, and you have a nutritious and delicious meal! 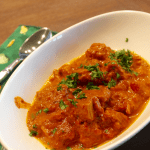 Once again, here’s a nutrition panel where I’m going to hedge a bit. I feel certain that if my kids were gone, and my wife and I were REALLY hungry, we could polish off this whole recipe! But that wouldn’t be very smart. I’m just saying that it all depends upon how large your portions are. I went ahead and assumed that you’d be able to get six servings out of this chicken tikka masala recipe, but it won’t surprise me if it actually turns out to be only four servings. Just adjust the numbers below accordingly.

Also, I did not include the rice or cauliflower that most people are going to serve this with, just one more thing to keep in mind when trying to figure out how this dish fits into your daily nutritional needs. 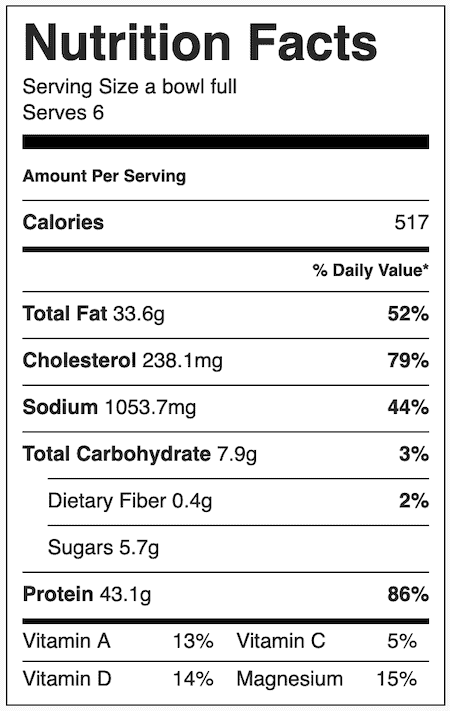