I don’t know what other people think of when they hear the words Chicken Pot Pie, but I immediately think of frozen pies in a metal tin from the mid to late 70’s. And not really in a bad way, almost affectionately.

Which is not to say that I want to find a few and heat them up for dinner tonight. I don’t. But I was very happy to have discovered how to make a pretty awesome chicken (or turkey) pot pie at home.

This recipe is my adaptation of Thomas Keller’s pot pie from his Ad Hoc At Home cookbook. The biggest change I made to his recipe was increasing the amount of dough that I make to be able to use my 12″ enamel cast iron skillet, which is probably too large for a dinner for four, maybe more suited for eight servings, with leftovers!

If you aren’t looking to have such large servings, you might think about reducing the amount of dough I use, and go with a normal 9-inch pie plate for your pot pie.

1 – The Crust – In general I am not a fan of highly processed foods, and have dramatically reduced the amount of bread I eat over the past many years. But I don’t think every single person needs to drop their carb input down to zero, at least not for me. I simply feel better and think I function better with a reasonable amount of high quality carbs in my system.

Which is why I make my own crust, no store bought pastry for me.

This is a very butter heavy crust, which is why it bakes up so well, and is delicious, so make sure to use really good butter! I have a 12″ cast iron skillet, which produces a whole lot of pot pie, but it also means you need to make quite a bit of crust, significantly more than you for a “normal” sized pie.

As someone who isn’t great at pie crusts, I prefer to have a bit more dough to work with rather than too little. Which is why I use 3 1/2 cups all purpose flour combined with 3 1/2 sticks of butter. It’s a lot of dough. I also add 1 1/2 teaspoons sea salt and 6 tablespoons very cold water.

Measure your flour out into a mixing bowl and then cut your butter up into small cubes, working as quickly and as safely as possible to keep your butter cold. Use your hands and grind the flour into the butter to the point that it becomes mealy and all of the butter pieces are no larger than a pea.

Add the water and work the dough until it becomes smooth and pretty, like the picture below. Divide into two pieces, one a bit bigger than the other, the top and bottom, and wrap them up separately in plastic wrap and place in your refrigerator.

2 – Make Your Sauce – I think this step should be next because it is going to take a solid 30-40 minutes to reduce the bechemal sauce and you’ll be able to get started on the chicken and vegetables while this is doing its thing on the stove.

Again, just like the dough, we are making a big pot pie here, certainly family size, and we need to make sure we have enough sauce, nobody wants a dry pot pie. I start with a roux made with 4 tablespoons butter and an equal amount of flour whisked together over medium heat, but without getting very brown at all.

Then I add four cups of whole milk and my seasonings and very gently simmer until reduced to about 2 1/2 cups, give or take, stirring frequently to ensure I don’t burn it or leave a huge patch of scorched flour on the bottom where it helps nobody.

3 – Cook The Chicken – I’m a big fan of chicken thighs and definitely recommend using this cut for any future pot pies, especially the boneless skinless variety you can almost assuredly find in any grocery store. Of course I am gong to recommend organic and as sustainably raised as possible or affordable.

For this size recipe, I would use about 2 to 2 1/2 pounds of chicken thighs, and now is the time that they need to be cooked a bit before assembling the pot pie. Nothing fancy here, just brown them up on both sides, minimal seasoning as you’ll add that later, just ensuring that we get to eat cooked chicken and don’t accidentally under-cook our poultry!

4 – Chop and Cook The Vegetables – I don’t know how to make this step any clearer… but chop the veggies! While the chicken is cooking and your bechemal sauce is reducing (still stirring frequently, right?) is the perfect time for this step, almost like you are doing two or three things at once!

I know some people advocate par-boiling the potatoes, carrots and even the celery first, to make sure it all gets cooked through during the cooking process. I was hoping to find that this step to be a waste of time, as well as dirtying an extra pot in the process.

But it’s not a waste of time, it’s actually a necessary step. I tried this recipe once or twice without the extra step of boiling the vegetables ahead of time, and they came out under-cooked, which rendered the whole experience underwhelming and disappointing.

5 – Assemble And Cook – If you haven’t already, make sure to preheat your oven to 400 degrees.

Take your chilled pieces of dough out of the refrigerator and roll out the larger one in between two sheets of parchment paper. You’ll need to roll this out to 15 inches or so to make sure it fills the skillet. If you find the dough is getting too warm, place it back in the fridge while you work on the second piece and just rotate between the two pieces until they each are the size you want.

Once you’ve rolled out your bottom dough, transfer it to the pan and gently press it into place so that you don’t have any bubbles under the crust.

Pile all of your chopped and cooked veggies, plus your chicken, into a large mixing bowl and pour your reduced sauce through a sieve into the bowl. Mix thoroughly, and then scoop into the prepared pot pie crust, pouring any remaining sauce over the filling.

Place your second rolled out piece of dough on top and trim off the excess that falls over the sides. Working your way around the cast iron skillet, gently pinch the top crust to the bottom crust, they will both likely be warm enough at this point that they will naturally stick together pretty easily.

Brush a little egg white wash over the top crust, then make several slits to allow the steam from the filling to escape and then slide into the oven for about 60-75 minutes.

I judge doneness simply by looking at it… if the top crust looks great, then it is good to go! 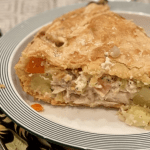 Same concept as before, but most people aren’t going to start from scratch and buy a turkey just to make a pot pie. However, if you find yourself with a bunch of left over turkey after Thanksgiving, or any time of year, it couldn’t be any simpler to swap out the two pounds of chicken in the original recipe with an equal amount of turkey meat.

I am one of those people who always buys a turkey that is significantly too large for the number of people I am cooking for on Thanksgiving, just to ensure that I have enough for left over sandwiches the next day, and ideally enough for a pot pie over the weekend!