I have been taught over the years that there really isn’t much that I could make as a home chef that would be more boring than boneless chicken breasts.  And I believed it.  For a long time.

And then my wife and I went to Blackberry Farm in Knoxville, TN, which is (pretty)-well known for food-to-table meals that are way above and beyond what most people get to experience. It is a real treat and if you ever get the chance, I suggest you visit… but I digress…

One of the activities that they offer at Blackberry Farm is the opportunity to watch their top-level chefs prepare a nice sampling of the food that they serve, and then of course, a tasting of the demo creations!

Again, I was super lucky, and got to sit in on one of the demos, and it just so happened to be boneless chicken breasts served alongside homemade pasta (which was also a revelation) followed by a strawberry crisp straight from the oven with a small scoop of vanilla ice cream on the side.

I will never think of boneless chicken breasts the same way, I almost feel bad for how poorly I’ve talked about this cut in the past.

So here goes… my interpretation of the demonstration presented by two guys at Blackberry Farms:

These first few steps really set this chicken preparation apart from every other chicken I have tried, and now feel that it is imperative to include.  Does it take more time?  Yes?  Does it make it more difficult to cook chicken this way as a weeknight dinner after a full day’s work?  Yes.

So eat late, get off work early, or save this for a weekend, but don’t skip the brining and drying steps!

My brine couldn’t be much easier, I dump three tablespoons Kosher salt into a container that is sized appropriately for two chicken breasts, and then add 3-4 cups hot water, and stir until the salt is dissolved.

And then I add about 1 cup of ice, just to cool down the brine so it won’t cook the chicken when I add it in a few minutes.

If you have easy access to skin on boneless chickens, ideally ethically raised without hormones and antibiotics, good on you!  I don’t often find this cut, but bone-in split chicken breasts are probably one of the easiest cuts to find in any grocery store.

I’ll take just once sentence to reiterate how important it is to me, both for health reasons as well as moral, to search for and buy pasture raised animals and avoid those raised on CAFOs, or Concentrated Animal Farming Operations, yuck.

Once I make my brine, then I’ll take just a few minutes and cut the breast meat away from the bone, and also separate the tender or tenderloin, so that I am left with three pieces from each split breast that I bought at the store.

For this recipe, I will be using only the breast, and so I save the bones and tenderloin for future use, most likely for chicken stock.

Once I’ve separated the breast from the bone, I add it to the now cool brine and leave it there for 45 minutes up to an hour.

Step 3 – Air Dry In The Fridge

After removing the chicken breasts from the brine, place it on a wire rack, ideally set of a tray or plate, so that you don’t drip nasty raw chicken juices all over the place.

And then set that tray with the chicken breasts on it in your fridge for at least an hour, but two or three won’t hurt.  We just want the surface to dry off a bit so that it sizzles hard when it hits the pan and we’ll be left with nice crispy skin.

Not only are we cooking chicken breasts here, but we’re going to add a few aromatics and other ingredients to help elevate the whole experience.  But before you get all of your ingredients ready, get that chicken out of the fridge about 30-45 minutes before you want to start cooking it.  This might also be a good time to preheat your oven to 350-400 degrees.

I’ve branched out just a bit from the demo I saw, but the overarching theme is the same.  I get four tablespoons of butter out, two for the pan when adding wine and aromatics, and two for when the chicken is cooked through and I want to use all the wonderful drippings and juices in the pan for a nice finishing pan sauce.

I also set aside a few sprigs of fresh thyme, but I suppose all sorts of herbs would work here, just for a nice flavoring touch in the pan while the chicken is finishing in the oven.

For the pan, I also prepare one half a cup of white wine, like a decent Chardonay, and since I’ll likely be making a pan sauce out of what is left over in the pan, I always make sure the wine is not horrible!  For the sauce afterwards, I’ll use one half cup of homemade chicken bone broth if I have it on hand, which I usually do.

And lastly, I prep a few cloves of garlic.  I don’t press it, because the little pieces often burn, but rather peel and lightly smash the cloves, and that way they just impart a little flavor to the pan and help make the whole house smell great.

Alright, the rubber meets the road!  Fire up your stove to medium to medium high, add a little cooking oil, and let it heat up so that it easily coats the entire bottom of the pan.  For me, that usually means one or two tablespoons of avocado oil.  Make sure you let it get hot, but without burning, as that would totally ruin the entire dish.

Then the chicken goes in, skin side down, very important, as we are trying to really crisp up that skin, which is the main reason we took so much time drying it out in the fridge in Step 3.

Your chicken is going to want to stick a bit to your pan (I’m using enamel cast iron here) but just trust it and let it be, and when that skin is nicely browned and crispy, it will release from the pan, and you’ll easily be able to pick it up and turn it.

Once you have cooked the skin side of your chicken to your desired level of brownness and crispiness, it’s time to turn it over and add the ingredients you prepped in Step 4.  So in goes two tablespoons of butter, the wine, thyme and garlic.  Do not add the chicken stock yet and make sure to hold back two tablespoons of butter for just a bit later.

If you haven’t already, turn your chicken over, skin side up, and place the whole pan into your preheated oven.  If you like, and I do, place a digital oven-proof thermometer into the thickest part of your thickest piece of chicken.

While the chicken is in the oven, you can twiddle your thumbs if you like.  Or clean up your kitchen a little.  Or get your side dishes ready.  Whatever works for you, I’m not judging here. 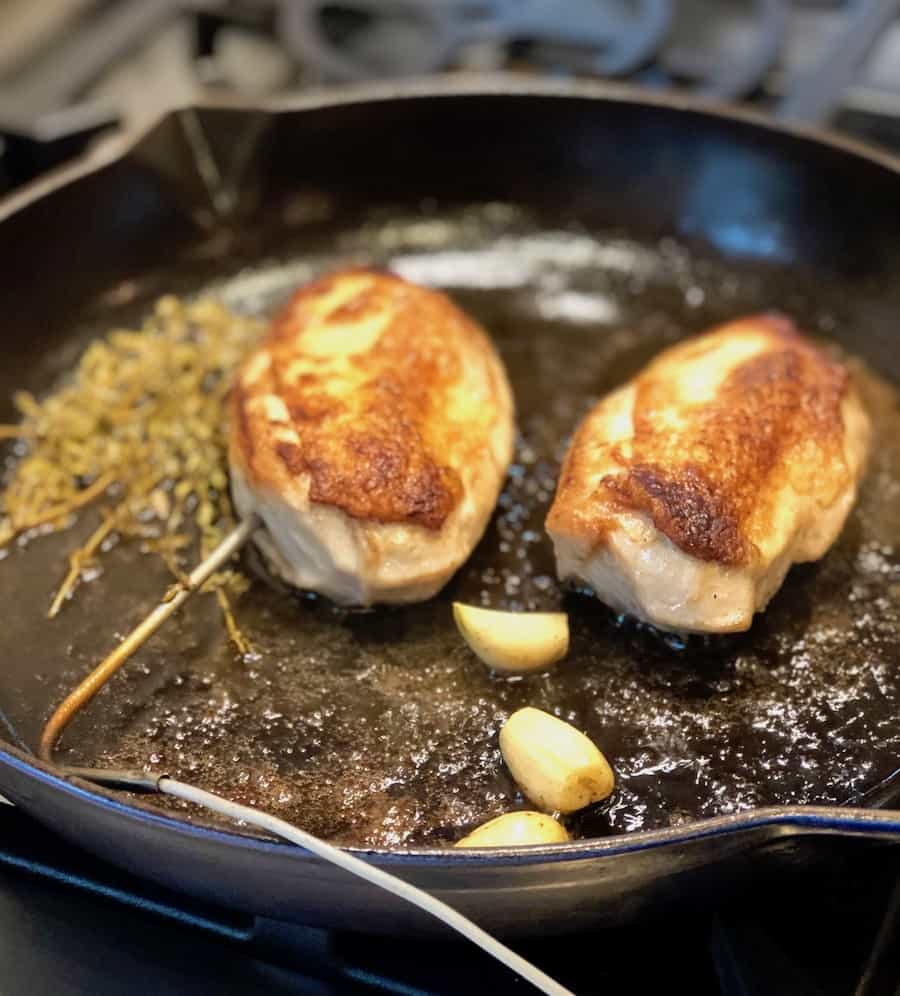 Your chicken is done, nice job.  If you are using a digital probe, like I do, then you watched it hit 165, give or take.  I know some people take it out a bit early, because it will continue to rise a few degrees, carryover cooking, while it waits on a plate for someone to eat it.  I set my alarm for 163 and take it out once the alarm starts beeping at me.  Seems to work just fine in my home.

Using a towel for my hands, because the pan is screaming hot, I place the whole pan on my stove and move the chicken to a my cutting board until I’m ready to serve dinner.  They thyme is totally spent, so I toss it at this point.  The garlic can stay or go, no damage done either way.

In either even, with a little luck, you should be left with some dark liquids and maybe even solids rolling around the pan.  Rejoice, that is pure flavor waiting to be untapped.

Turn your burner on, grab a whisk and then add the chicken stock to the pan and whisk away.  With the burner going on high, your stock and leftover juices should start boiling soon and start reducing in volume pretty quickly.  Let the liquids reduce to your desired viscosity and then either lower the heat to low or turn it off, then add the remaining two tablespoons of butter.

Keep that whisk going and make sure that butter is fully incorporated. 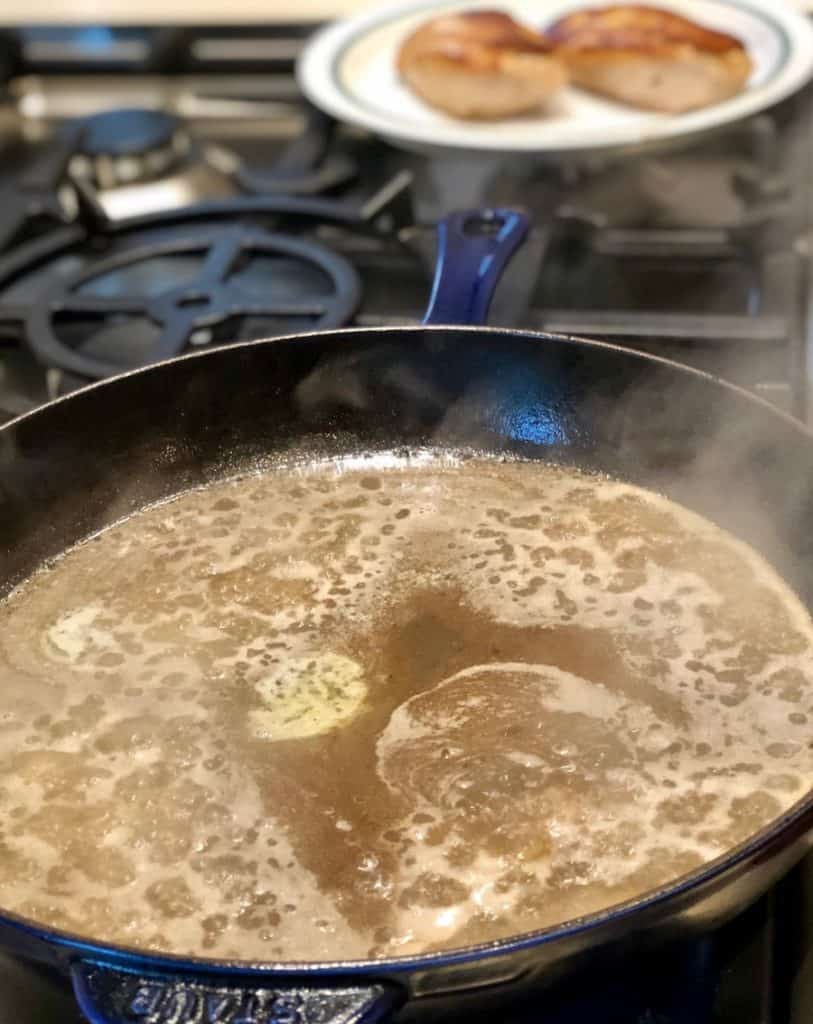 I think that’s about it, seven basic steps to the best skin-on boneless chicken breasts you’ve (probably) ever had!

One more note as I wrap up.  I’ve always had trouble when serving chicken and turkey breasts, carving the skin right off the entire roast as I try to cut it into a nice presentation.  And then the guys at Blackberry clued me in… turn the breast over before carving it.  Game.  Changer.